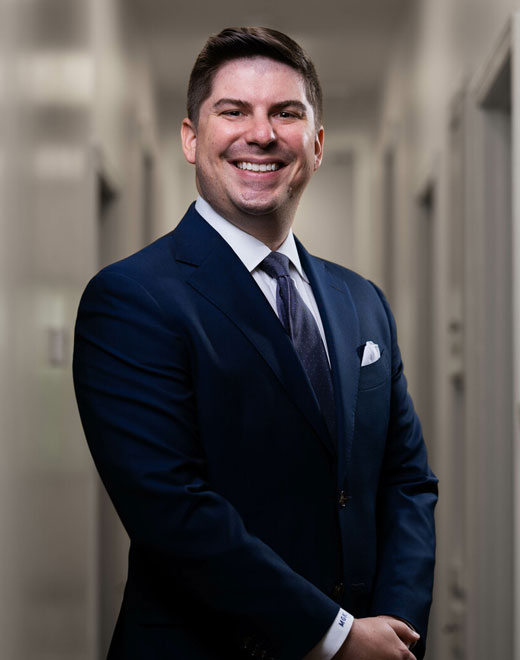 Michael has recovered millions of dollars in verdicts and settlements for his clients, including a recent $1,000,000 settlement for a client injured by another driver’s negligence. Michael aims to guide his clients through the complicated personal injury process while providing concierge legal counseling. Michael focuses his practice on representing people injured in automobile and trucking collisions, dog bites, slip and fall incidents, negligent security, and families in wrongful death cases.

Michael is an active member of the Georgia Trial Lawyers Association and has served on several committees in that organization. In 2019, a panel of Georgia’s top trial lawyers selected Michael as a member of the 2019-2020 LEAD Program, a prestigious, highly-acclaimed program consisting of qualified applicants with less than ten years of legal practice experience and those who are 35 years of age or younger. In addition, Michael’s peers have selected him as a Super Lawyers Rising Star since 2021. No more than 2.5 percent of attorneys under 40 with less than ten years of practice experience are named to the Rising Stars list. His peers have also selected Michael as a National Trial Lawyers Top 40 under 40 recipient based on his achievements, settlements, and verdicts as a trial lawyer.

Michael is an Atlanta native and graduate of The University of Georgia and Mercer University School of Law. Michael worked as a judicial clerk for the Presiding Justice of the Supreme Court of Georgia and as a law clerk for a reputable Atlanta law firm during law school. Michael was a mock trial team member and competed in several national trial advocacy competitions. Michael was also highly active in his law school community and held several leadership positions, including President of the Mercer Trial Lawyers Association, American Bar Association Chair, Student Bar Association Class Representative, and Student Mentor. Michael graduated on the Dean’s list and was awarded the Faculty Award for Outstanding Legal Writing in 2013 and the CALI Excellence for the Future Award in 2015.

Michael enjoys reading, meditating, playing sports, running, and hiking in his spare time. His other hobbies include photography and travel. Michael also loves spending time with his wife, son, and golden retriever.

Michael G. Kaufman received his undergraduate degree in History from the University of Georgia. During his studies, Michael worked as an intern in the Office of the District Attorney for the Western Judicial Circuit, along with the Clerk of Court for the Supreme Court of Georgia. Michael earned his law degree from the Mercer University’s Walter F. George School of Law. During law school, Michael worked as judicial clerk for the Presiding Justice of the Supreme Court of Georgia. Michael graduated on the Dean’s list, and was awarded the Faculty Award for Outstanding Legal Writing in 2013.

While serving as president for the Mercer Trial Lawyers Association, Michael founded the MTLA Trial Lecture Series, a well-attended, school-wide lecture series featuring Georgia’s top trial lawyers. Michael graduated on the Dean’s list, and was awarded the Faculty Award for Outstanding Legal Writing in 2013 and the CALI Excellence for the Future Award in 2015. Michael was nominated among the Top 40 Under 40 by the National Trial Lawyers Association for his numerous victories as a young lawyer.

Michael G. Kaufman has worked as judicial clerk for the Presiding Justice of the Supreme Court of Georgia, and has held a number of leadership positions, including President of the Mercer Trial Lawyers Association, American Bar Association Chair, and Student Bar Association Class Representative. In addition to his victories in the courtroom, Michael has also secured countless settlements for those involved in accidents and those who have sustained injuries as a result of negligence.

Michael G. Kaufman centers his practice around personal injury and those involved in everything from car wrecks to slip & falls and pedestrian accidents.

Tell Us About Your Injury, We’re Here to Help.